Damp patch-damp stain on the chimney

Have you got a damp stain/patch on your chimney that you can’t seem to get rid of? Is it penetrating damp, a leak, rising damp or hygroscopic salts?

We have seen many cases where roofs have been repaired around chimneys a number of times and the other roofer / builder has said the other company didn’t do the lead work correctly, roof repairs, chimney repairs or the pointing etc etc and then they still have a damp stain on the internal chimney breast again and again.

Recently I went to carry out a damp survey in Wiltshire, they had literally given up, this is how the story goes……. My client purchased a property 6 years ago, it was noted by the surveyor before purchase that the internal chimney breast had staining and the chimney probably needed small pointing works and further investigation was necessary. This work was carried out after they purchased the property in the summer and was decorated, a few months later on in the year the damp stains on the chimney breast came back, this time it was worse than before. So they called the roofer back in, he checked the chimney and tested it with a hose pipe and couldn’t see any problems….. he disappeared very quickly…….. They then called another roofer-builder, this guy pulls around on the lead flashing and seems to think the chase isn’t deep enough and also it needs a new roof, tells the client this is what needs doing, orders the scaffold and off we go again! The damp patch on the chimney seems to slowly shrink and disappear over the next few months, then its back again……… by this time my client said they couldn’t believe it. They then called the roofer out again and explained that the damp stain is back! He couldn’t find the cause and he disappeared very quickly like the last guy.

Next comes the roofer with the all singing and dancing website, more professional, and more knowledgable, and he seems to think the chimney needs to be simply taken down and capped over with some ventilation. Seems like a good sensible idea they think……….A couple of weeks later the scaffold lorry turns up, up goes the scaffolding, up goes the roofers, down comes the chimney, this is then all capped off, vented and pointed and looks like a brilliant job. The damp patch doesn’t go and the roofer can’t seem to find the cause….same old story!

You can imagine what my client was thinking now. By this time they had given up and thought they would have to put up with it. They then get some rising damp problems and contact a couple of damp proofers to come and carry out a survey, I then come along and have a chat about the high ground level causing the damp problem at the front, whilst looking at the front I said, “I see you’ve had a new roof then”, and bang….I get hit with it. And I said “thats probably salt damp” “Whats that” my client said, I then showed them a couple of case studies I had on dropbox. That was the Eureka moment for them. I went one better than that though, I showed them the damp patch grow, to do this I use a humidifier, this can produce high relative humidity quickly, give it 5-10 minutes you can see the damp patches grow. The below pictures show the humidifier in action raising the relative humidity of the room to show the hygroscopic salt damp patch growing.

The below picture shows the chimney breast before I increased the humidity in the room using humidifiers, as these salts absorb moisture from the air you can visually see the damp patch grow. 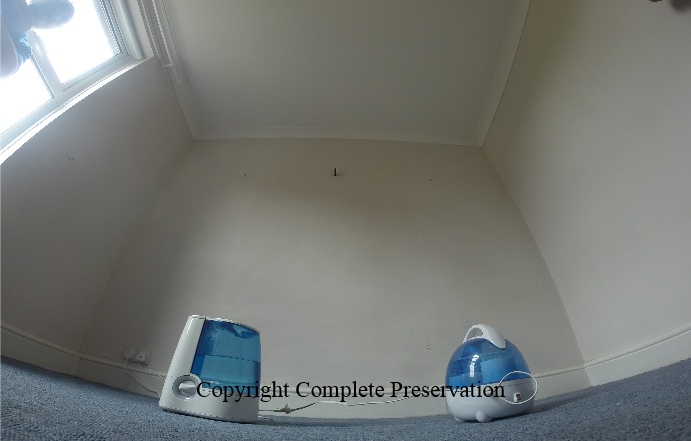 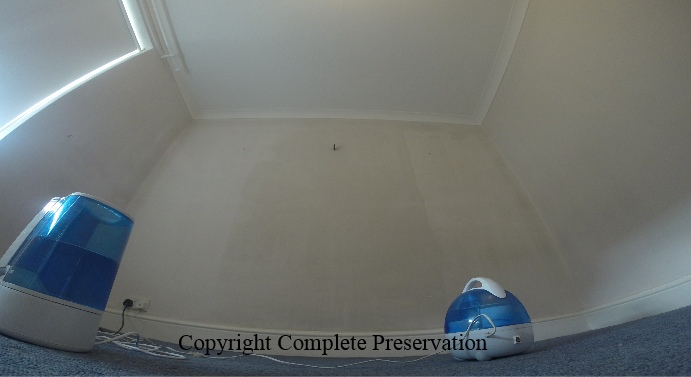 Again you can clearly see the damp patch where the old chimney was. 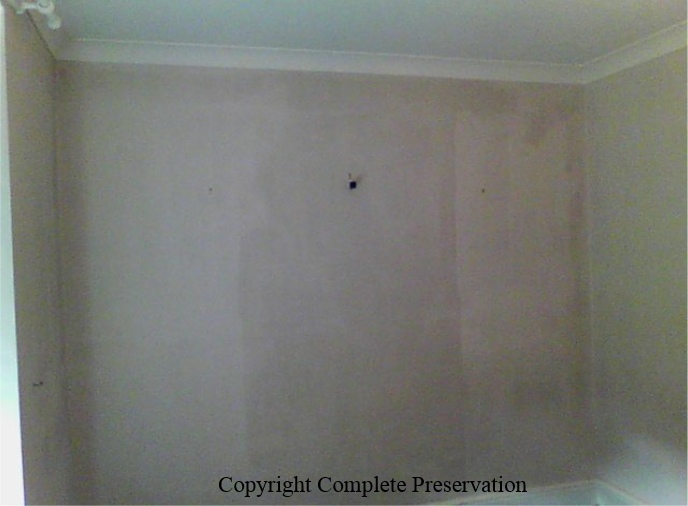 Damp stains and hygroscopic salts on the inside of the chimney wall. 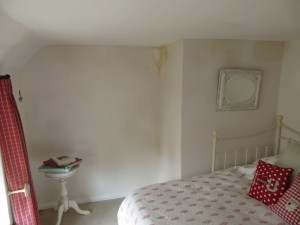 Damp patch and staining on the internal chimney breast. 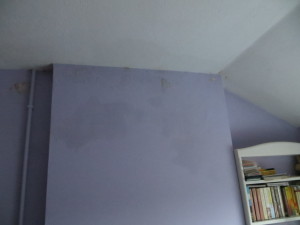 Damp patch and staining on the chimney breast and plasterboard ceiling. 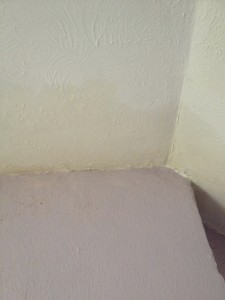 This is what you sometimes see on an old property where the chimney is, this is hygroscopic salts that have migrated through the bricks. 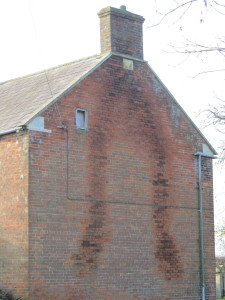 And again, hygroscopic salts on the external wall of the chimney. 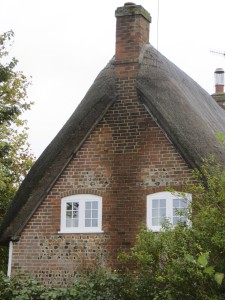 Another issue I now find is that the diagnosis has gone the other way. The reason I say this is because it wasn’t until people like me were blogging about hygroscopic salt damp on chimney breasts as a possible cause, it was nearly always though to be penetrating damp. Now move forward a number of years, and damp experts now just presume its hygroscopic salts without any form of analysis. I have seen many cover up jobs where some form of damp barrier system has been applied to stop migration of hygroscopic salts, and it has failed simply because penetrating damp was also an issue. This can also leave any built in structural timbers at risk of decay if left in a damp wall.

How do you diagnose the problem

The only way you will conclusively know, is to take samples of the plaster and test for free moisture and/or hygroscopic salts.

We offer a full survey and analysis of the plaster-mortar, if you’re not local to us we also offer a service where you send the sample to us and for £60 we will inform you of the moisture content % if there is a source of moisture, or if it’s just hygroscopic salts causing you the staining, we will inform you of the hygroscopic moisture content and if nitrates and chlorides are present.

This is a short video of me explaining salt damp on chimney breast.

If the damp surveyor looking at your damp chimney breast or damp ceiling issue isn’t removing plaster samples for analysis following the laboratory methodology in BRE DIGEST 245 you might not get the correct advice.