The big question is if the woodworm infestation is active, and the significance of the activity…..is it causing a structural problem? Many people think that a little woodworm will not cause much of a problem, this is true but over a long period of time, like under a suspended timber floor that isn’t vented,where there are low temperatures which will subsequently produce high humidities there will be, especially on fast grown sap wood. Timber is naturally hygroscopic, this means it will absorb moisture from the environment, so if the sub floor is wet so will the timbers.

Woodworm love and need moisture to survive, but if you can lower all forms of moisture there will be no woodworm. Sometimes this will be impossible, so modern intervention will be needed, by means of targeted treatment to the damp areas. This is particularly the case with modern fast grown softwood timbers, which are more prone to decay and infestation unlike old oak heartwood timbers.

Below is an image of what a Deathwatch beetle looks like. 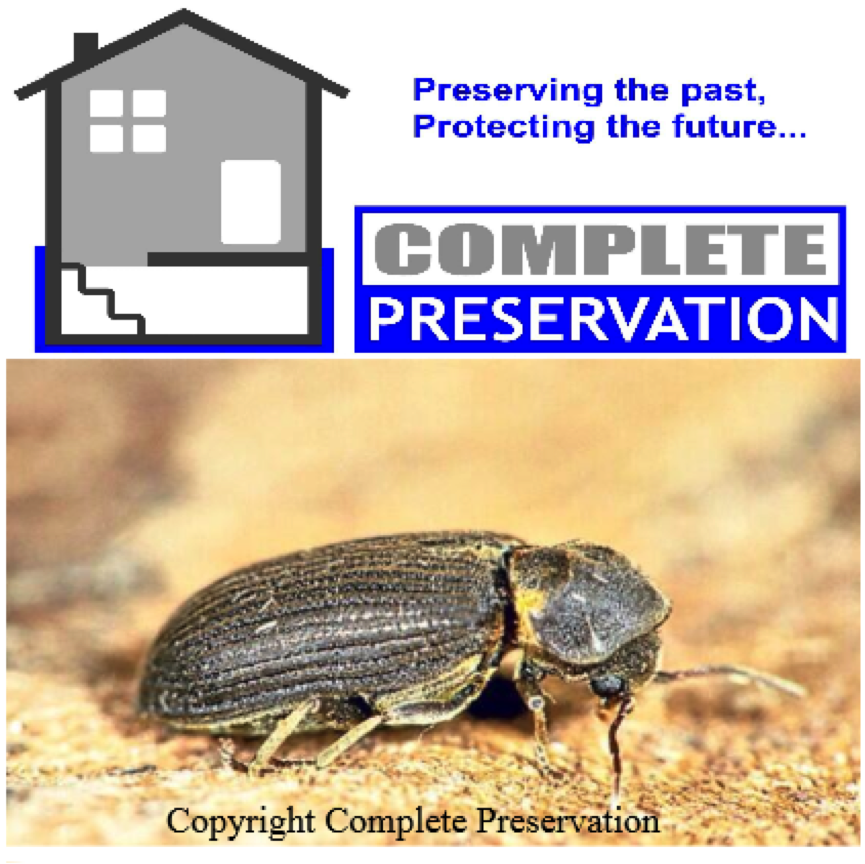 When monitoring Deathwatch beetle to see how much of an infestation there is, you will need to count and collect the beetles during the flight season, and mark where in the building that they have been found or are emerging from. 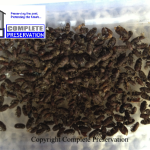 This is what the frass looks like, this is used to identify which type of beetle has been infesting the timber. Deathwatch Beetle frass looks like cream bun shaped pellets (see red circled area). These will also feel gritty when rubbed between your fingers. The emergence holes are around 3mm and as you can see in the picture there is plenty of tunnelling. 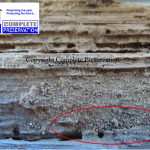 This picture shows an infestation of the Deathwatch beetle, this caused a severe structural problem as the first floor lost complete lateral restraint because of the infestation to all the bearing end timbers at first floor level. 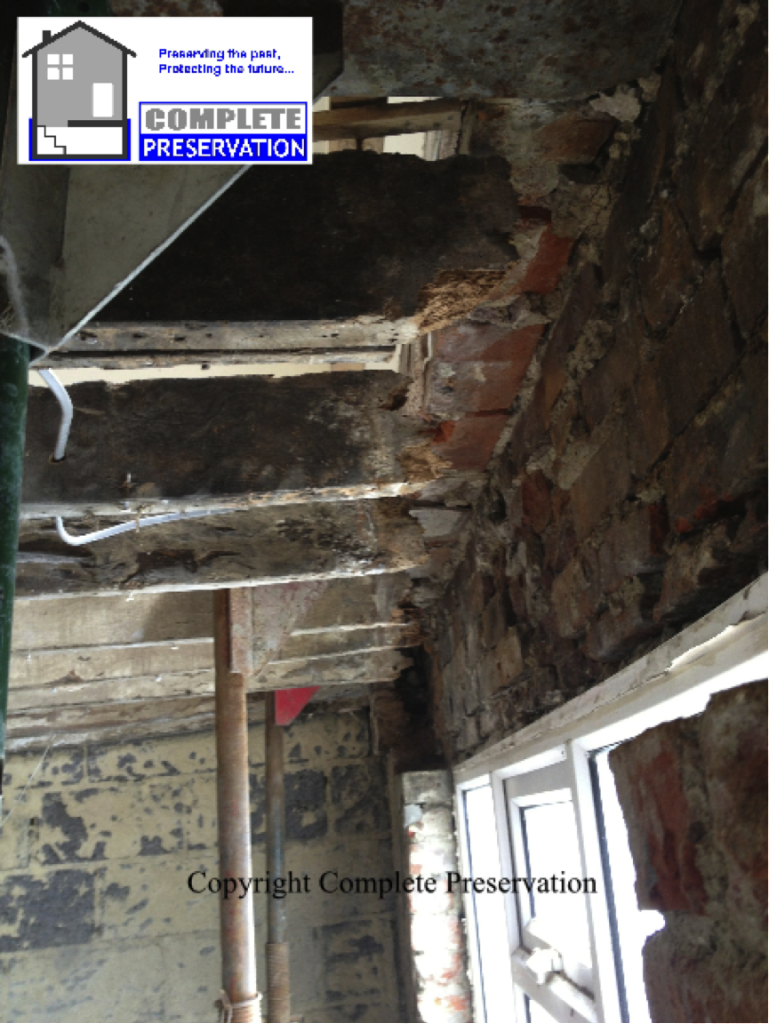 This shows the effects of a long term Deathwatch beetle infestation to a timber lintel, the bearing end was completely destroyed. 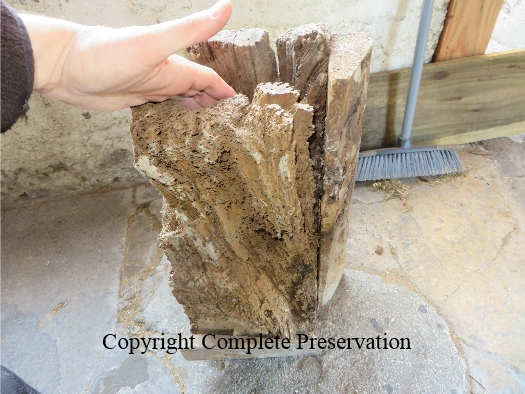 Treatment of Deathwatch beetle needs to be carefully considered, and it’s more beneficial to carry out targeted treatment to the specific areas only, as you have seen in the above pictures this is normally the bearing ends or where timbers are getting damp.

Resistance/micro drilling can be carried out to check the condition of the timbers, this can be carried out with expensive equipment or simply by using a long 3mm auger/drill bit. Obviously this will not be complete diagnosis but you use the drill to feel resistance, and that will aid an investigation into where targeted treatments are needed and the extent of infestation.

The below picture shows an active woodworm infestation to the rafters in a roof of a property in Wiltshire. 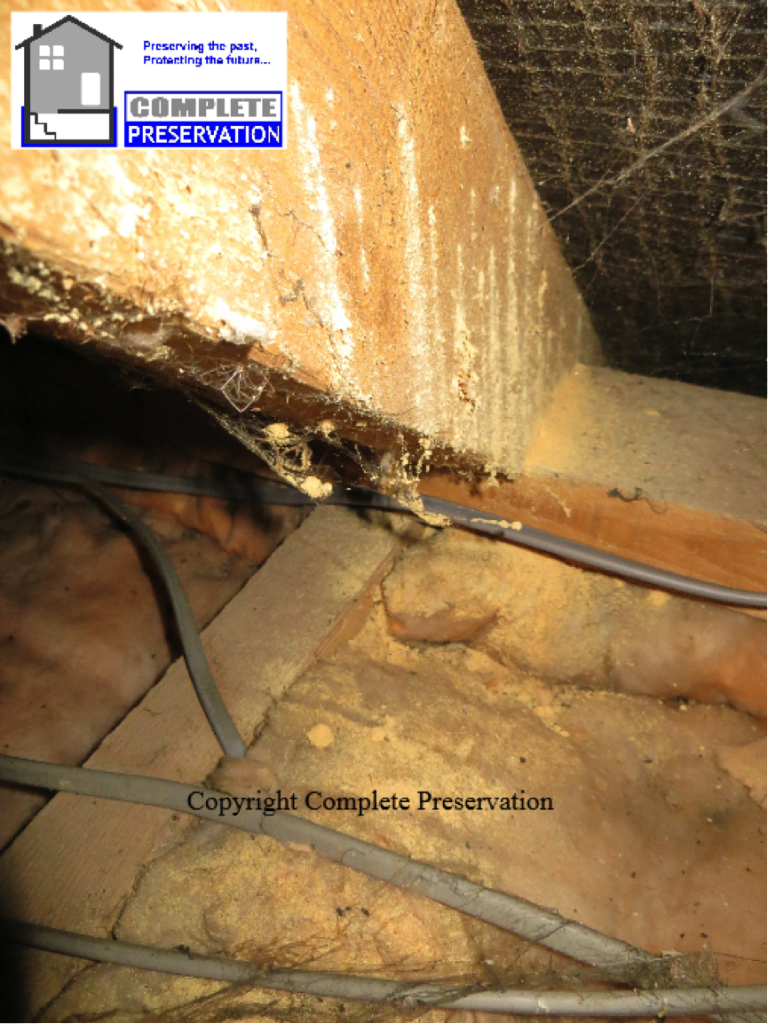 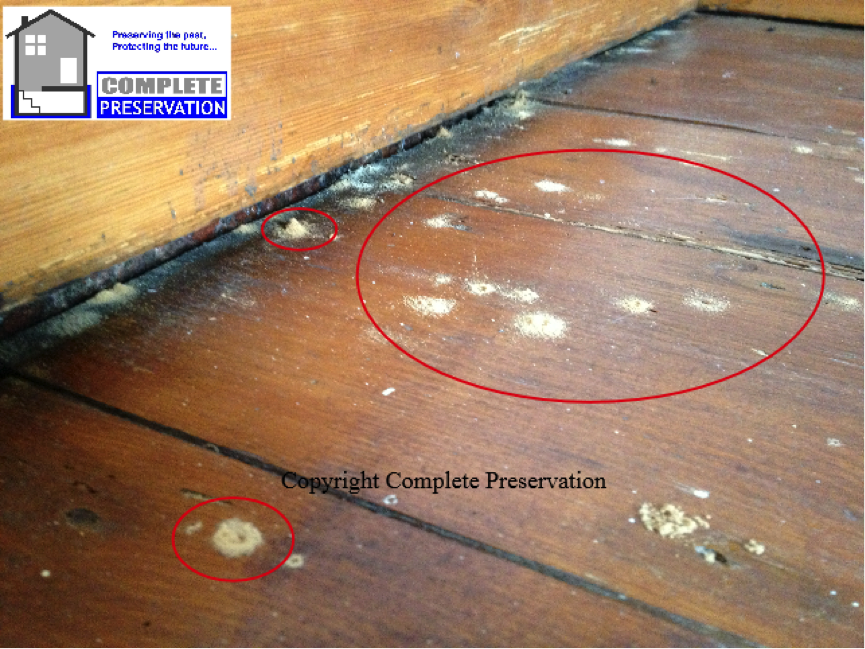 Severe active woodworm that has caused structural defects, note the top of the floorboard doesn’t have hardly any emergence holes compared to the underside. Notice cavity wall insulation, which restricted sub floor ventilation as this was blocking sub floor ventilation via the air bricks. 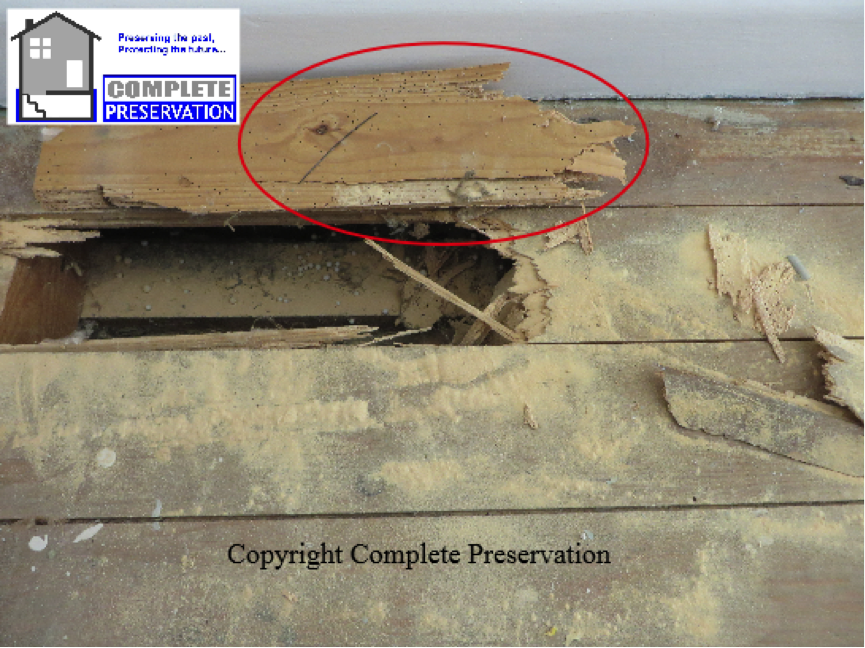 Active woodworm infestation on an old fuse board in Wiltshire. 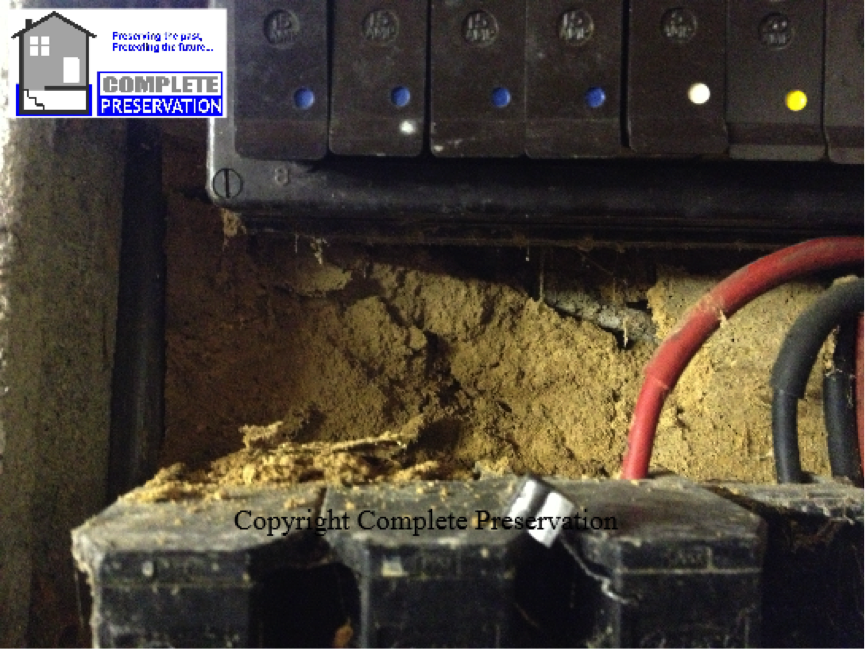 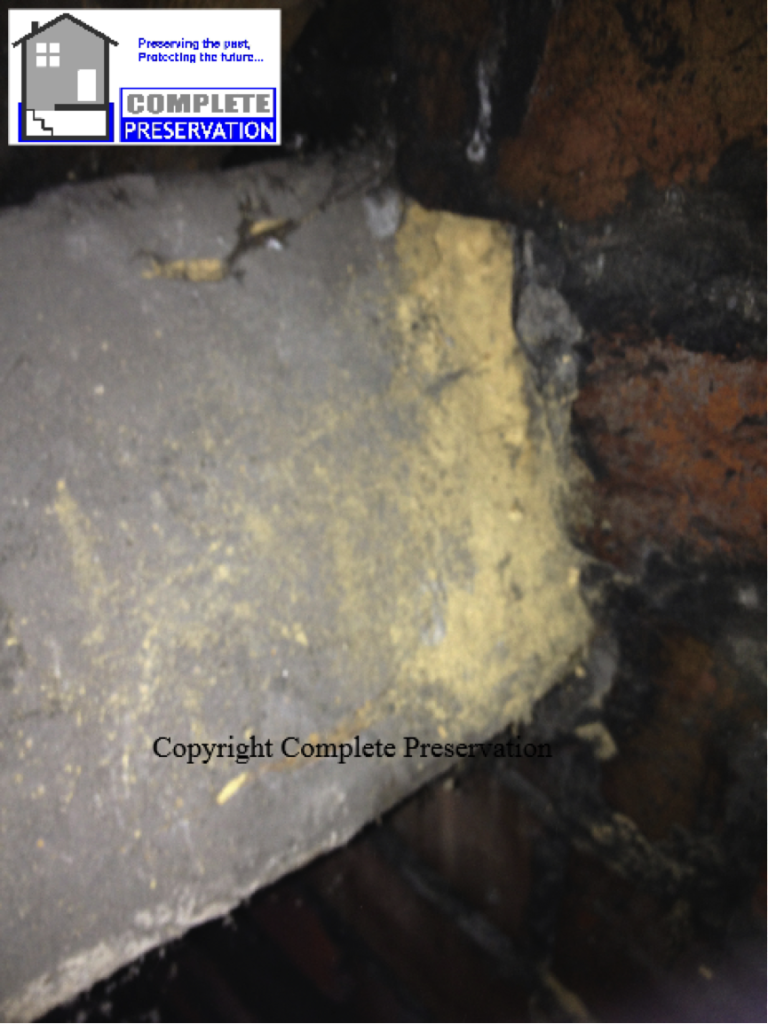 Typical woodworm tunnelling in a timber by the Common Furniture beetle, this was on a bearing end timber in a property in Wiltshire. 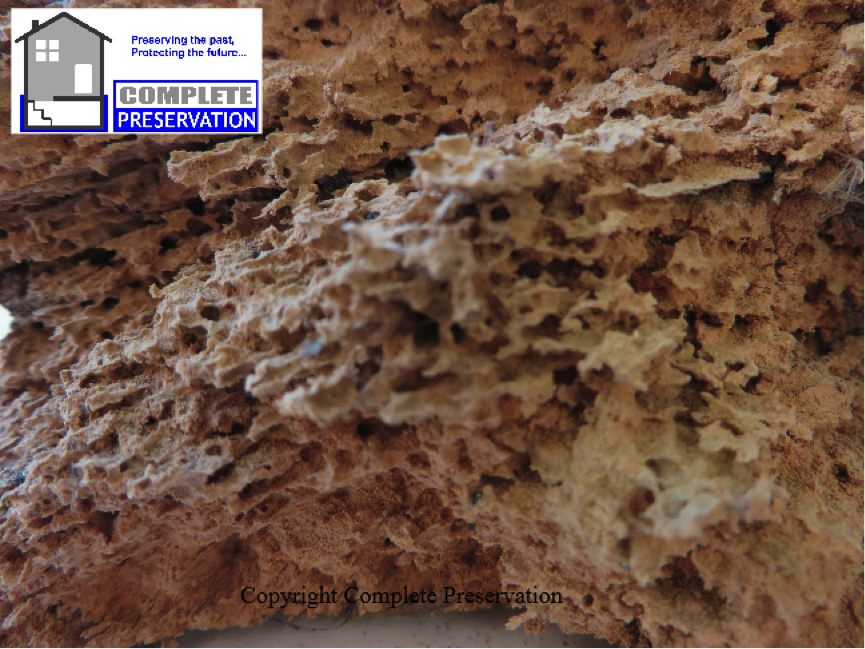 The below picture shows a moisture reading of the floorboard, the reading shows the timber isn’t at risk to decay. 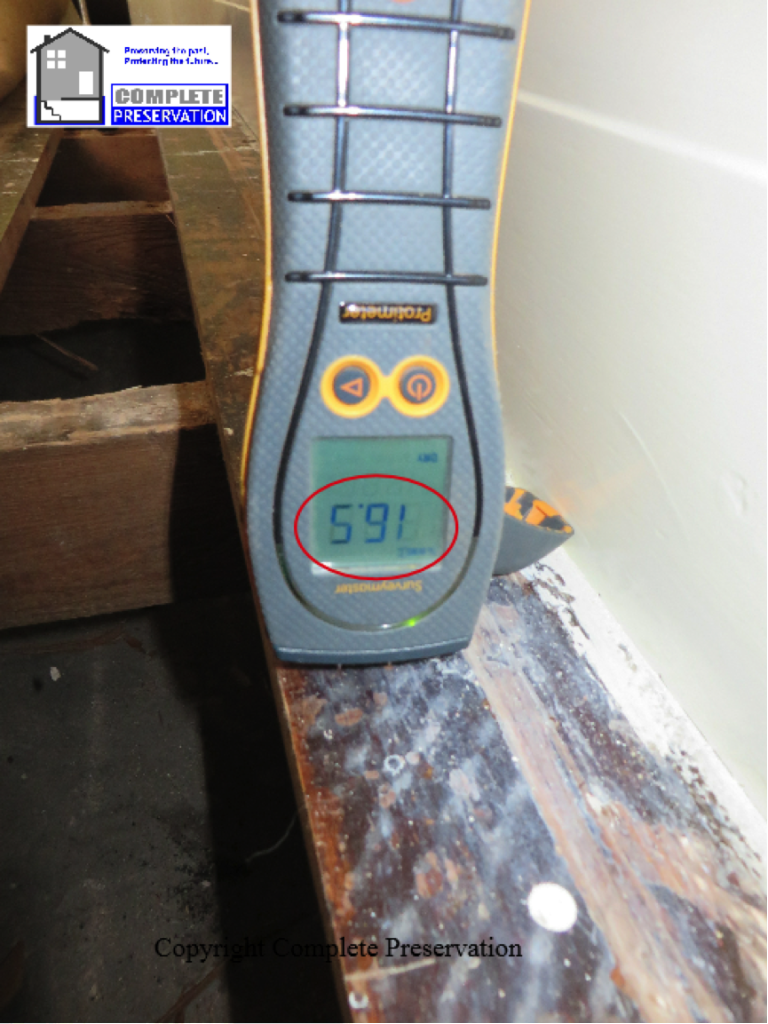 The below picture shows the same floorboard on the underside, the reading shows that the timber is at risk decay, and will also promote the environment needed for woodworm infestation to survive. This is why most sub floors that are not adequately vented will be at risk of fungal decay and woodworm infestation.  Timbers should be isolated from any dampness, and sub floor ventilation should be checked and cleaned of any cob webs and debris, if necessary ventilation should be increased as necessary. 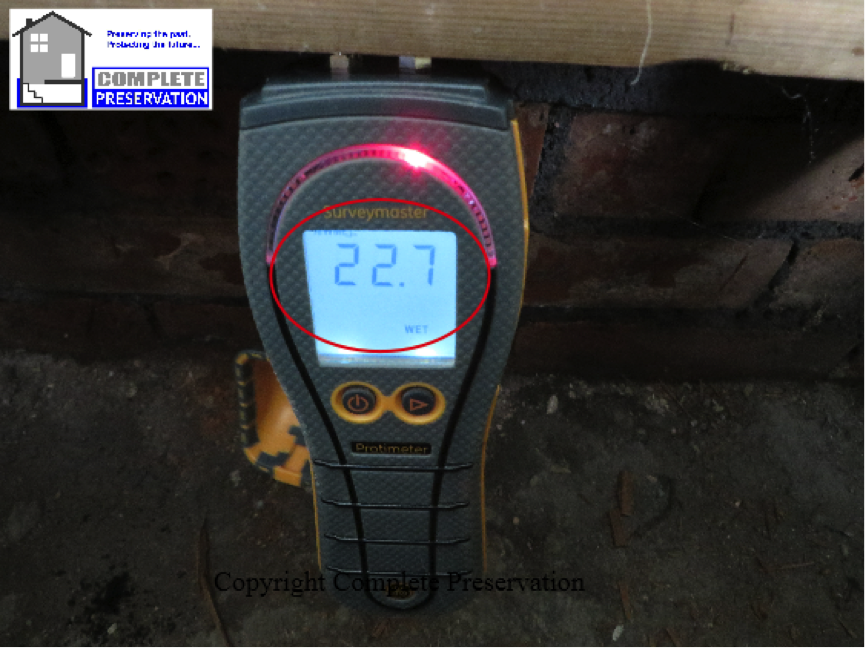 The below video explains some tips in regards to Deathwatch beetle surveys and monitoring.